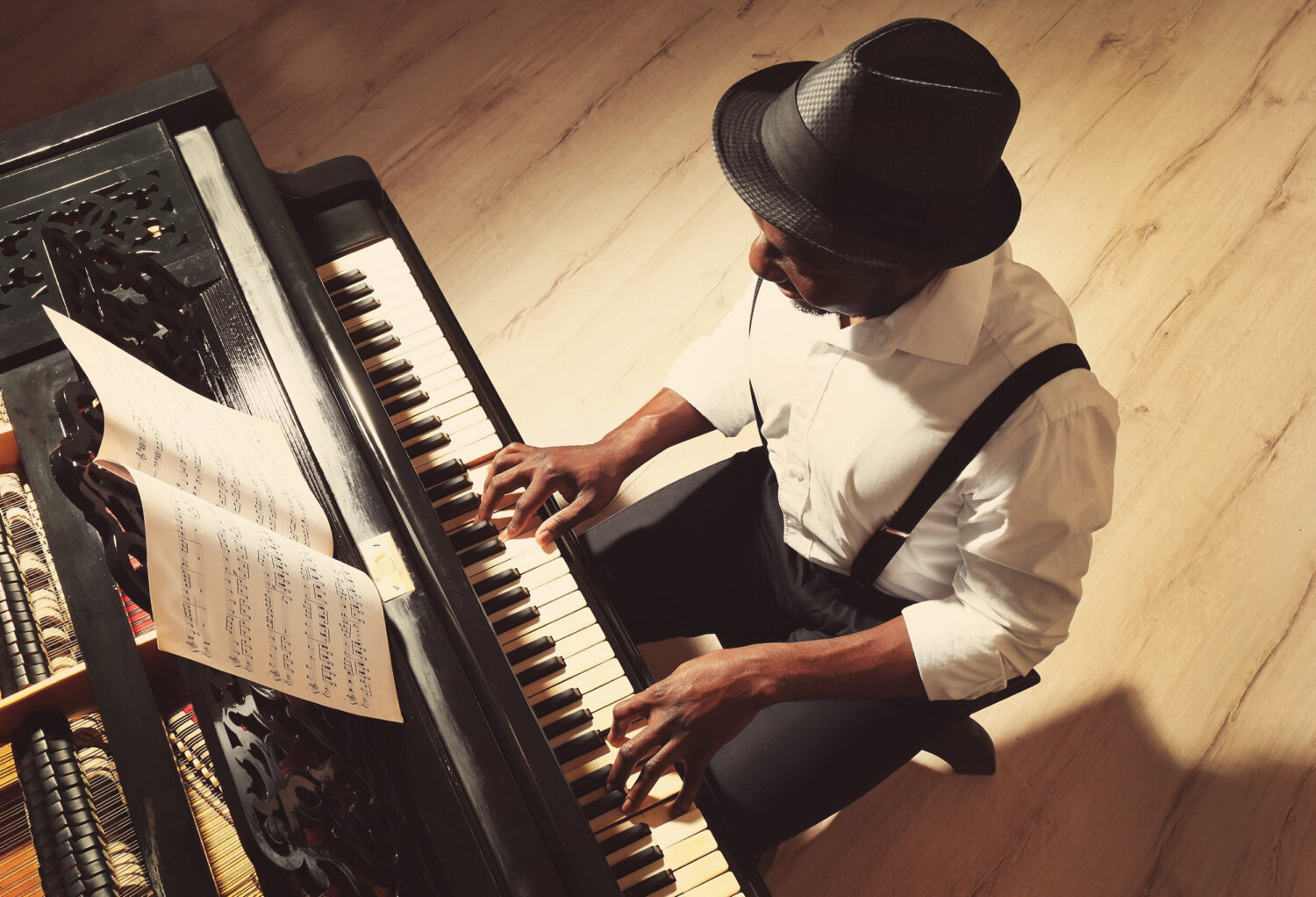 We often consider playing a musical instrument to be a visual activity. Most of us rely on sight when trying to play the piano, but many blind pianists have had to learn this the hard way, without their sense of sight.

Visually impaired musicians have a big drawback, and despite this disability, a few of the world’s best skilled and greatest pianists have emerged.

In this context, a few well-known musicians come to mind; Ray Charles and Stevie Wonder are big names, and reasonably so. As you’ll see from this list of famous blind piano players, there are many more amazing blind composers and pianists.

Ray Charles, a visually – impaired musical expert, is among the few notable blind people who mastered playing the piano. Most of your curiosities about this musical icon have been addressed in the movie “Ray,” a biography of his life.

What caused Ray Charles’ blindness? He began to lose his sight at the age of four due to glaucoma. He was fully blind by the age of 7.

Charles began learning to play the piano at the age of three, but his classes from a family friend were casual. With the help of braille music, Charles eventually learned classical piano. This is a tough challenge since you must understand the left and right-hand motions separately when studying braille.

Ray is regarded as one of the founding members of soul music. Charles has received several honors from the music industry’s mainstream, with his musical colleagues hailing him as a “true genius.”

“Georgia on My Mind” and “Hit the Road, Jack,” both released in the 1960s, were huge successes. He later produced the album “Modern Sounds in Country and Western Music” in 1962, which was a smash hit, selling over a million copies.

Charles’ career didn’t stop there, and he continued to perform until his passing in 2004. He was a tremendous visionary and is hailed as one of the great musical stars of his day as a blind black musician and songwriter. His concerts were intense and sometimes joyful, attracting his audiences.

Moondog is a fascinating blind artist. His full name was Louis Hardin, and given the fact that he died more than 20 years ago, he is still recognized as one of the most brilliant and unique musicians.

Moondog was not driven into exile; instead, he preferred to live on the streets, as he felt it had a significant impact on his career. Subway noises and other city noises were believed to enter his compositions and affect his stage presence.

At the age of 16, he got blind. He learned most of his playing by ears; however, he did require braille for a few lessons after that. He had also been a gifted drummer as a child.

Moondog used to wear dresses like Thor, the Norse god when his narrative was made into a popular movie series.

Louis was brought up in Kansas, but he could be seen between 52nd and 55th Streets in New York, dressed up, and became famous as a blind vocalist or blind pianist by locals. He’d also sell his music all across the community. Moondog was dubbed “the Viking of 6th Avenue” on occasion.

Moondog recorded 16 solo records over his career. If you merely look at the total sales, neither of them were especially popular, although composers such as Philip Glass cited him as an inspiration. There’s no denying Louis Hardin had a massive effect in his own right.

Marcus Roberts is an outstanding example of a blind artist and is one of the best music pianists. Roberts performs swing and classical music in addition to jazz. Not only is he a jazz musician, but he’s also a composer. He is well-known as a composer and group leader.

He was born into a family of musicians. His mother was a religious singer, and even though he did not begin formal piano classes until he was 12 years old, it is clear that he has a rare talent.

He was raised in Florida and had cataracts and glaucoma when he was four years old. He began to play the piano in churches at the same period.

He entered the Florida School for the Deaf and the Blind in Florida, where Ray Charles trained as a young man. The fact that two of the most well-known blind pianists attended the same institution is a remarkable coincidence.

In the 1980s, he became well-known. He was recruited into Wynton Martals’ band because of his ragtime-influenced playstyle, which set him apart from the rest of the band. Since then, he’s founded his bands and recorded music as a part and leader of bands.

Several Albums cover a wide range of inspirations and genres, including classical, jazz, and a variety of others.

Because of his chaotic musical abilities, Roberts has been dubbed “Thelonious Monk’s logical heir.” It’s easy to see how engaged he is in his music and how his approach has been compared to Fats Waller’s.

Marcus Roberts is among the modern piano greats who also emerge to be blind. He is sensual and amazingly skilled.

He may be the world’s greatest blind pianist and composer. Stevie Wonder (Stevland Hardaway Morris) is a well-known singer. Stevie Wonder’s trademark look and glasses (it’s difficult to see a photo of him without them) are mixed with enormous singles like “Superstition” and “Isn’t She Lovely.”

He’s among the few blind composers to have had such a major effect on the music world. His album “Songs in the Key of Life,” produced in 1976, was radical and inspired a slew of artists who have risen to the top since then.

Stevie was inducted into the Rock and Roll Hall of Fame and the Composers Hall of Fame for his composition abilities. You may devote a great amount of time to learning about his successes and industry reputation.

He has received 25 Grammy Awards, as well as a National Medal of Freedom from Barack Obama. We can write an entire page about his accomplishments and recognition in the field!

Stevie Wonder was born prematurely, both in terms of eyesight and early life. Retinopathy, a major disease in preterm births, arose as a result of this. It makes the body halt the final phases of eye growth, which can result in the retinas tearing.

From a tender age, he was engaged in music. His mother shifted to Detroit when his parents got divorced while he was four years old. Stevie Wonder joined the Whitestone Church and sang in their chorus, beginning his musical career. As a child, he picked up a variety of instruments swiftly.

There’s no doubt he was a gifted musician. Stevie Wonder got his title from the Founder of Tamla, a Motown music company, who signed him while he was only 11 years old.

Berry Gordy had listened to a song Wonder had written and decided to hire the young genius. He gave him the nickname “Little Stevie Wonder,” which lasted.

Although his 1970s albums are undoubtedly his most well-known, Stevie Wonder is still alive and active. He has a total of nine kids! Seldom has there ever been a musical genius like this, certainly one who is blind.

Stevie Wonder is a multi-instrumentalist who can handle the drums, and his artistry and composition are widely recognized as among the world’s best.

Another well-known pianist from the twentieth century. Almost all of the musicians here on the list are great jazz pianists, but Milsap’s style is unique. In the field of folk music, he is recognized as a leader.

He was brought up nearly blind and had a difficult childhood. He was abandoned by his mother as a young child and nurtured by his grandparents. He grew up in a low-income home. After being hit by a part of his school’s officials when he was 14, he lost the small vision he had left in one of his eyes.

He was gifted from a young age, learning how to play music at the Governor Morehead Institute while still in high school. His formal education began when he was about 14 years old.

Milsap’s first record, released in 1963, was a hit. During the 1960s, he produced 15,000 copies and had some popularity; however, in the 1970s, he had a major turning point and the insane amount of achievement he had begun.

He partnered with RCA Records in 1973, and his song “I Hate You” charted in the top ten of the leaderboard. In 1974, the records began to pour in. Both “Pure Love” and “Please Don’t Tell Me How the Story Ends” reached the top of the charts, and Milsap earned his first Grammy Award. And the top ten didn’t end there.

It’s probably an insult to label him a great country musician. He has 35 #1 one country music record hits to his name. He’s still making music, and a record of duets was released in 2019.

George Shearing is a well-known British pianist who rose to fame in the jazz world. He was brought up in 1919, the youngest of nine children (yes, nine). He went through a lot of difficulties as a child, but he overcame them to become a successful musician.

Shearing is a blind musician who has written nearly 300 songs, several of which have become hits. By most stories, he began playing the piano when he was a very small kid, as little as 3 or 4 years old.

Due to his financial difficulties, he had to give up attending university on a full scholarship to play in the local bar. He was paid only £5 per week to perform in a live band of blind artists.

In the 1930s, he got aired on the BBC and began to receive respect for his abilities. He traveled to America in the 1940s and became a well-known jazz musician.

His music was a combination of jazz, swing, and some new classical. He even was invited to play in the White House for three different leaders.

Shearing lived to be 91 years old and spent most of his days in the music industry. As a result, he was recognized as a songwriter or performer on hundreds of singles and albums.

He became a legend, and before his death in 2011, he was awarded by the Queen of England for his music efforts, making “Sir George Shearing” the proper way to pronounce his name.

His honors use a Special Award from the BBC Jazz Awards, but this remarkable musician’s effect goes far beyond honors. Against all odds, Shearing excelled and delivered several jazz classic hits.

Lennie Tristano was brought up in 1919 and passed away in the 1970s due to a tragic event. He is best recognized as a great blind pianist, yet he also has other musical skills, such as director and composer.

He also impacted a whole era of pianists and played an important role in the education of several jazz musicians.

Nat King Cole, another blind musician, named Art Tatum, with whom he briefly teamed, and Charlie Parker hugely influential on Tristano. Unfortunately, due to the period he worked, there’s not much to hear, and several of Tristano’s backlists can be difficult to come by.

He’s better renowned for his contributions to music, namely teaching others and being noted as an inspiration by jazz greats like Dave Brubeck and Miles Davis.

Tristano was elected into the Grammy Ring of Honor in 1913 for his work on Crosscurrents, a song from the 1940s. Tristano might not have been a huge star, but his influence on jazz music from the 1930s to the 1970s, as well as his early death, is obvious.

Above mentioned are some of the brilliant piano players who did not let their disability come in the way of their passion. We can take a cue from these musicians and get inspired to not let any thorns hinder us from reaching our goal.